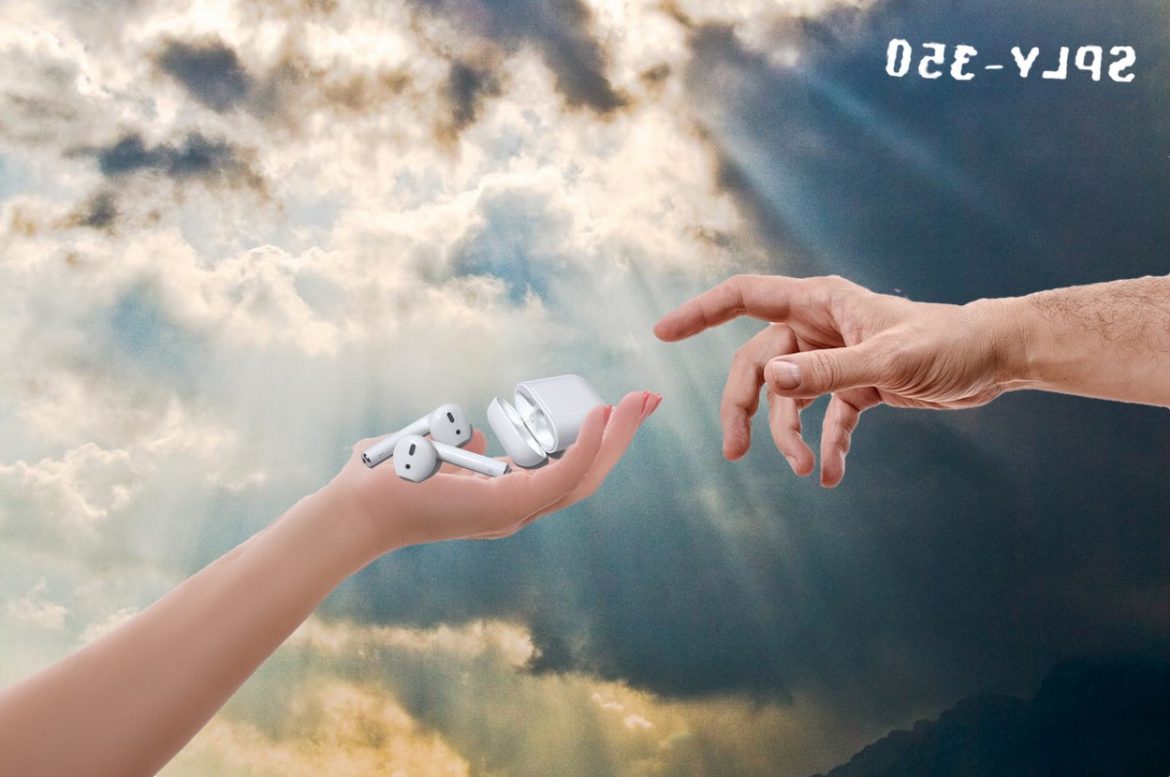 When I crack open my AirPods case in low lighting, a gentle glow radiates from within, as if I’m Daenerys Targaryen peering into the cracks in my dragon egg to guess its species, or a lab tech in the year 3000 checking the status of a test-tube alien baby. When I snap my case shut in the subway as it approaches my stop, the noise resonates across the nearly empty train car, signaling to the smattering of travelers that I am a member of the digital elite: a powerhouse for the technocratic age, a woman who knows what she wants and how to get it—especially when that “it” is an overpriced chunk of white plastic and the two even more overpriced chunks that reside within.

I was a late convert to Apple’s latest release, a reluctant groveler at the throne of the AirPod God. For months, I scorned my classmates with their truncated buds. I kept wearing my wired headphones and mismatched, floppy dongle as a badge of pride, proof that I was not susceptible to the puppeteering of the tech overlords. But as my peers caved in one by one, I grew painfully aware of how tangled my wires were each time they emerged from my pocket, how embarrassing it was to tuck my phone into my waistband at the gym, how utterly plebeian I was allowing myself to appear. In the years since the first MacBook hit shelves, Apple has gradually reoriented the wealth paradigm, allowing items of status to be purchasable on a mass scale and thus loosening the iron grip on a domain historically dominated by the ruling class. AirPods—just like the headphone-jack-less iPhones that necessitate their existence—are expensive enough that you can’t reasonably justify buying them, but not so expensive that they’re out of reach for the average middle-class prole like myself. Ultimately, $159 is a small price to join the realm of the digital glitterati; as I slipped them into my ears for the first time, I felt as if I’d just paid my membership dues to the most exclusive secret society in all of America. Somewhere in Silicon Valley, Apple executives rejoiced as they claimed their next convert.

This is the face of conspicuous consumption in 2019: as Thorstein Veblen coined it in 1899, the purchase of expensive items to display wealth and income rather than to fulfill an actual consumer need. In an age of 24/7 connectivity and instant access, it’s only natural that the latest hot commodity would be easily available and covered by less than two days’ minimum wage pay. AirPods symbolize not the classic sophistication and old money of a Rolex, but rather the whims of the nouveau riche, the self-aware douchiness evinced by a horde of sarcastic millennials. Of course the generation stupid enough to turn vaping into a thing would be the one to embrace AirPods with open arms. It’s just that this time, instead of saying “I’ve decided to ruin my health, and I want to do it in style,” we’re saying, “I know these make me look like an asshole, and I know you’re still jealous.”

Juul season, as Jia Tolentino has observed, may finally be over, but the era of coveting illogically expensive, borderline useless and/or ugly shit is still in full swing. Take Yeezys, for example. Hideousness and bulk have long been staples of the sneaker world; just consider the Archlight from Louis Vuitton, which looks like some sort of Frankenstein’s monster shoe comprised of a decapitated handbag, two maxi-pads, and a pair of hospital-issue orthopedics. Yet few have reached the ubiquity of the Yeezy, which assault my eyeballs in the subway on a daily basis. Last week, I couldn’t stop studying the woman sitting across from me, sensible Target bags clashing incongruously with her loud footwear. These Yeezys were of the lime-green variety, with grayish stripes interspersed in a seemingly random pattern, making the shoe appear to be the victim of a contagious disease. The laces emerged seamlessly from the fabric of the shoe, like maggots bursting from the skin of a corpse; the height varied depending upon which part of the ankle the viewer gazed, rendering it neither high- nor low-top but rather a sort of confused medium. At the sole, the shoes appeared to have been melted by a hot iron, with bloated swathes of lime-green rubber on each side. Worst of all was the red writing stitched into the side: SPLY-350, but backwards, calling to mind a knock-off item bought from a sketchy Amazon retailer in a fit of consumerist pique. Yet this bizarre design choice was an intentional one, joining the ranks of such wildly popular and deliberately flawed shoes as the OFF-WHITE line, whose products appear to have left the factory unfinished.

That writing, of course, was the priceless part (or the part worth $220, to be exact). “Nobody knows what it stands for,” writes Peter Sblendorio, who confesses to being afraid to wear his pair outside due to the hefty price tag, “but at least it makes the fact that you’re wearing Yeezys unmistakable.” It’s not like the man behind the shoe hasn’t messed with us before—recall the $120 plain white t-shirt—but Kanye’s latest release feels on par with AirPods in its intention. Sure, the shoes might be comfortable (even “kissable in their plushness,” according to Troy Patterson), and sure, being able to move freely while still invisibly wired to my phone is thrilling. But there’s an unsavory aura hanging around both products—a feeling that Apple and Kanye are playing giant practical jokes on a horde of sheeple who, rendered blind by the allure of the elite brand name, will literally buy anything. Given just how deep their hands are shoved in our pockets, it might be more accurate to say they’re playing God.

A slightly more wholesome iteration of this paradigm is at work with Outdoor Voices, the clothing brand currently sweeping the nation, geared toward people who want to look like they’re perpetually on their way to work out. “I tend to think of it as activewear that costs more than seems entirely sensible,” writes Tolentino of the athleisure genre to which OV reluctantly belongs, “or as a spandex-clad arm of the long-standing ideology that urges women to improve the market value of their physical form.” Either way, it’s nothing new: Lululemon has been charging exorbitant sums for workout wear since 1998. But the stylish, deliberate marketing associated with OV (the brand pays Instagrammers for their influence, and encourages wearers to post with the hashtag #doingthings) bespeaks a new level of conspicuous consumption, one defined by deliberate superfluity. Sure, I could drop $75 to sweat all over a rose-quartz OV crop top sold through their collab with uber-classy womenswear label Madewell. Or I could just exercise in a worn-out pair of Soffee shorts like a reasonable human.

Maybe I’ve just been tempted and burned too many times by the allure of quotidian opulence; a coveted Fjällräven Kånken backpack that ended up being too small and flimsy to carry my textbooks comes to mind. In 2019, drawing the line between laudible and ludicrous is a constant challenge for the consumer. Controlled by a new generation of elite tastemakers, any hapless wannabe arriviste with a credit card can tumble down the rabbithole, only to emerge on the other side $500 lighter and festooned with semi-useless yet highly recognizable goods. Sans those retreating into the woods in search of utter solitude like Thoreau, few of us have a leg to stand on in defending our choices as buyers, because sooner or later, Kanye will release a shoe that we just have to have. So to my fellow trend-followers with funds to spare and an image to uphold, let us accept what we cannot change: AirPods come for us all in the end.