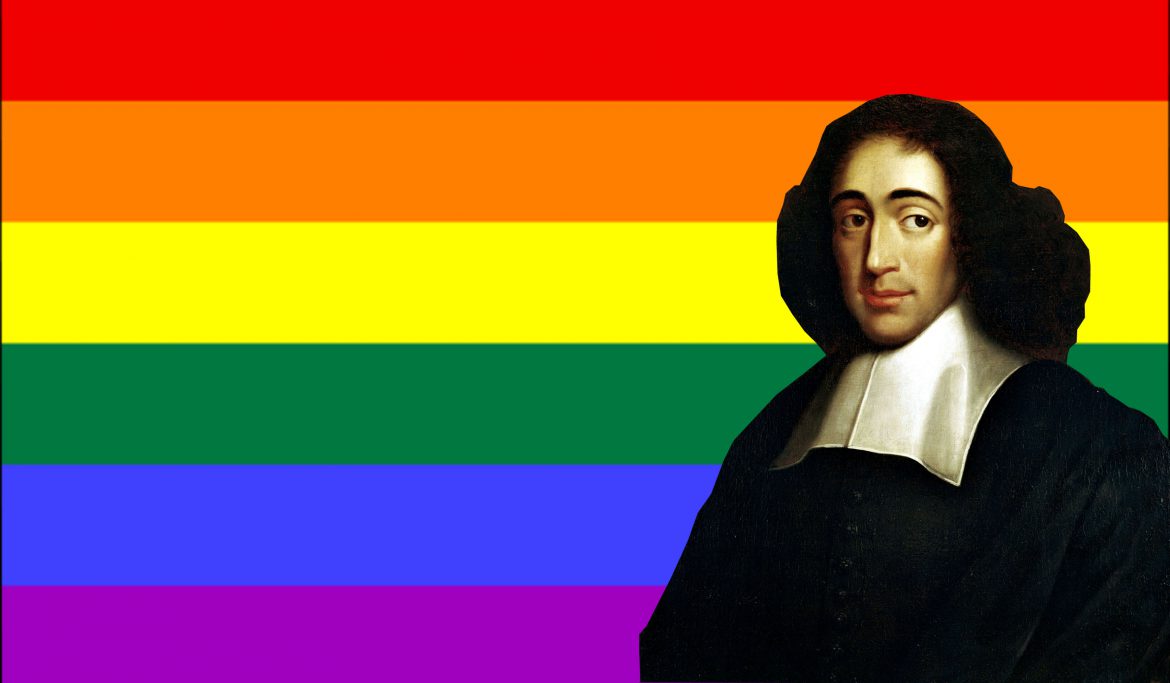 I’ve lived at Vassar College for two years now, and I have only visited my old home for special occasions and major holidays. Each and every time I return, there is a varying level of discomfort and friction between the place where my old identity was forged, and me as I presently exist. I reflected on the development of my queer identity during my first Pride Month since coming out, which comes along with all my confusion, and to be frank, anguish, at the inevitable conflict between having been a heterosexual Catholic and now being a queer agnostic. As one often does during existential crises, I turned to philosophy—in this case, the work of Amsterdam-born, Portuguese-Jewish pantheist thinker Baruch Spinoza.

Spinoza is known in the philosophical world for his pantheism, that God is one with Nature and Nature is one with God. That is, “For [Spinoza] God was no transcendent negative to be proved by miracles and worshipped by self-mutilation, but an immanent God here in us, proved by the eternal laws of reason” (Spinoza Selections, 1958, p. xxii). This is a starkly antithetical position to the socially accepted belief in an anthropomorphic God that made and ruled the universe while being apart from it. Spinoza fleshes out this line of thinking in his treatise, the Ethics, in which he uses the Euclidean geometrical framework of definitions, axioms and propositions to reach the conclusion that “Besides God, no substance can be nor can be conceived” (Spinoza Selections, 1958, p. 106). That is, all of existence, whether material or immaterial, is God.

Linguistically, it seems that the queer is confined to being the non-straight. However, Spinoza’s Ethics reminds us that, metaphysically, the opposite is true. In the argument that substances exist as one substance, we find the affirmation that queerness does exist.

Now, you might be wondering what a 17th-century philosopher would know about queerness at all. After all, his magnum opus is one of many texts arguing about God, but queerness is humanistic. The realization I had while reading Spinoza’s Ethics is that some of the commonly accepted Aristotelian axioms—tenets like the acknowledgment of the connection between cause and effect, or the acceptance of sameness and apartness—actually lays the groundwork not just for the existence of unorthodoxy, but for unorthodoxy’s infinity. I must be clear: While Spinoza’s overarching argument is vastly different from its opening foundation, the early ideas from which Spinoza launches Ethics are relatively one and the same.

From these, we can hypothesize the independent existence of queerness and determine, even after considering the old-school intellectual background that defined Spinoza’s intellectual development, that queerness exists as an independent entity not to be othered as a lifestyle beyond the norm. In providing an argument for the oneness of substance, Spinoza arrives at the conclusion that the orthodox and the unorthodox are but one and the same; these are simply different expressions of the same essence. As this applies to queerness, in arguing that there are no two substances, Spinoza challenges the notion that there is the queer and the not-queer. This further underscores the linguistic limitations of referring to the cisheteronormative as “straight” and the non-cisheteronormative as “queer.”

Consider the eighth proposition of the Ethics: “Every substance is necessarily infinite” (Spinoza Selections, 1958, p. 98). This is a loaded statement contingent on several previous propositions and definitions, among these the arguments that things exist, and that no two things are of the same nature. Most important, perhaps, to Spinoza’s proposition is his definition of finiteness, that which “can be limited by another thing of the same nature” (Spinoza Selections, 1958, p. 94). What all of this means, essentially, is that, because each substance is a unique instance of a particular nature that cannot be found in another substance, and because that which is finite is that which can be limited, substances are therefore limitless, insofar as its own existence is not reliant on that of another. We begin to see the cracks in the positing of the hetero- as the normative and the queer as the other.

This becomes much more clear when we take queerness as substance. By substance, I mean that which exists as an entity, whether it be in space or as a theoretical object. By calling the non-straight the “queer,” one is linguistically tempted into reducing queerness as less than an object and merely the absence of the straight, heteronormative object. Moreover, it becomes evident that queerness is much more than merely the ‘not straight’ or the unorthodox. Rather, queerness is its own object and its own entity that does not need to exist juxtaposed with cishetero-orthodoxy for its own linguistic existence. When we run this particular substance through Spinoza’s argumentative system culminating in the eighth proposition, we discover several things about queerness in general. What emerges are several truths that are generally accepted as self-evident, and not usually consulted through centuries-past pantheists.

For example, as a substance, queerness is self-causing, and its conception “does not need the conception of another thing from which it must be formed” (Spinoza Selections, 1958, p. 97). No, it was not something in the water that made me bi, nor was it seeing gay men getting married on TV. More interesting, though, is that as a substance, queerness cannot be finite because it cannot be limited by something else like itself because, well, there isn’t anything else quite like it. Therefore, as Spinoza speculates of substances altogether, the existence of queerness, “like its essence, is an eternal truth” (Spinoza Selections, 1958, p. 100).

This discovery highlights the linguistic limitations that we face in discussions of queerness, leaving heteronormativity largely to blame for this phenomenon. For example, straightness is linguistically posed as the norm, or the default. When a gay individual exclaims to the world, “I am gay,” there is a culturally coded implication that the person also exclaims “as opposed to straight.” This intimation is evident in the very usage of the word queer itself. Though we’ve taken great steps in reclaiming the word, the reason that the word was formerly pejorative is, of course, that it historically defines the strange, atypical, and non-normal.

Furthermore, not only does the concept of queerness exist, but as its own being, free from the philosophical shackles of theoretical heteronormativity. If we are to accept and adapt the theories of Spinoza, the LGBTQ+ community begins to metaphysically exist out of its own accord and in its own context, independent of its relation to the hetero-orthodox. Even though Pride 2019 is at an end, I cannot help but be grateful to the Euclidean geometrical argumentation of Baruch Spinoza for setting a few things straight.