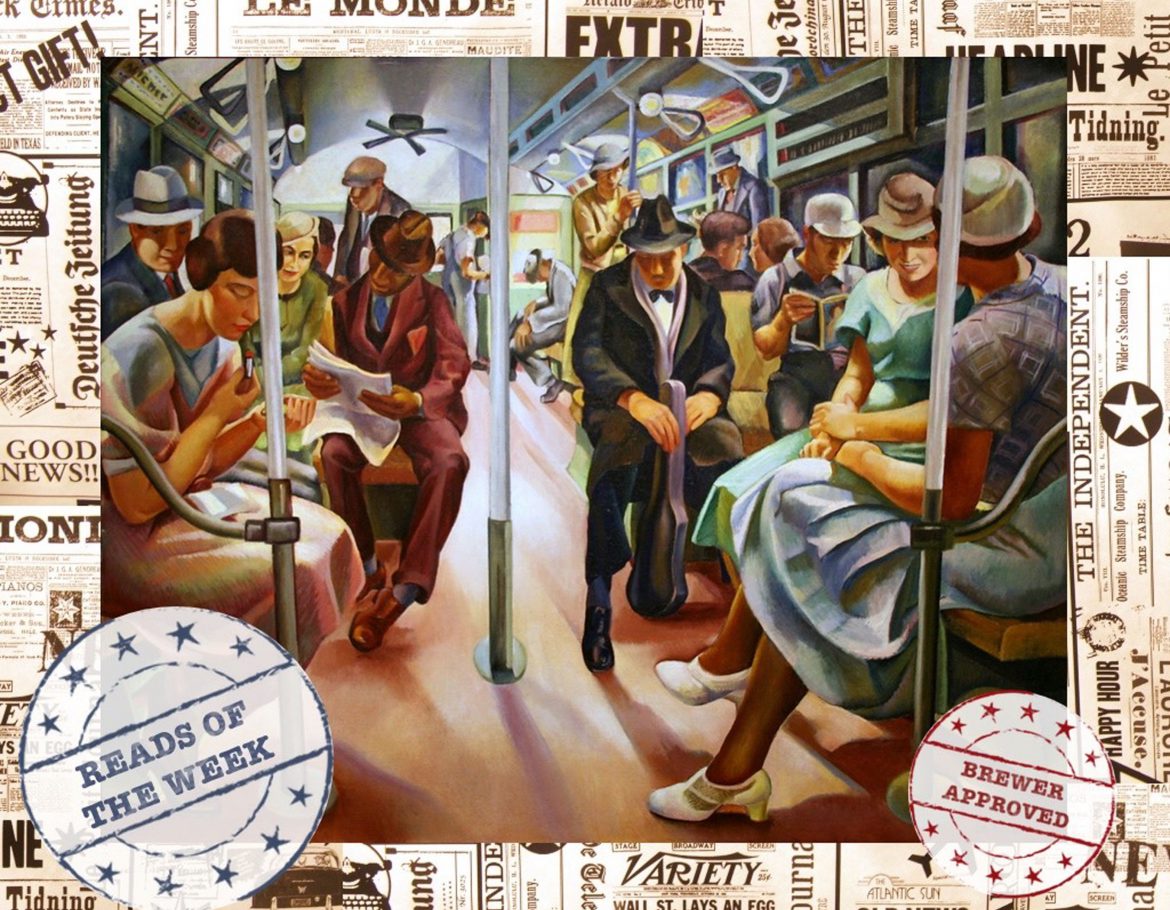 Close your eyes and picture the quintessential summer moment.

Maybe you imagined backpacking through a tropical rainforest, sweat streaming down your back and the trills of exotic birds in your ears; maybe you envisioned humid evenings in your family’s backyard, touch football games in full swing and air filling with the smell of barbecue; maybe your mind brought you to the sky-high office that houses your dream internship, or the halls of a local university where you are expanding your mind on your own schedule. Summer is many things to many people, and for those of us still in school, it’s often a strange and confusing liminal space separating us from the measured routine of college and the people we love back at Vassar. We at The Brewer’s Table have scattered far and wide this summer, but we can all agree on one quintessential summer moment: curling up with a great read. This week, Table Writer Talya Phelps shares her must-read articles for the first week of July. We hope you’ll give them a try and share in this moment with us.

Talk of Trump mercifully died down last week for once, replaced by incessant buzz on THE television event of the season: the first round of Democratic debates. As a gossip fiend and a wannabe political wonk, I eagerly drank in every moment (actually drank too), rolling into work Thursday and Friday eager to share my tepid takes with anyone who would listen. Being a member of the zero-attention-span generation, however, I needed some concise and pithy wrap-ups to help me sort out my opinions, and I found the above articles to be indispensable—particularly the Times piece, which includes helpful bite-sized commentary from various experts.

I’m a fan of Mayor Pete, who I thought performed impressively on Night Two, holding his own as the youngest candidate on stage and hitting all the likability marks at a time when the race is less about policy and more about charisma. Nevertheless, Buttigieg’s troubling record on police racism is key to remember, and may well preclude him from expanding his base beyond white liberals like myself. Check out the above Times piece to understand how the Black community in South Bend is responding to their mayor’s carefully prepared Eric Logan statement. Spoiler alert: It played better nationally than it did locally. But whether or not you support Mayor Pete, Charles Bethea’s charming deep-dive into his Rhodie past is worth a read. Spoiler alert: He taught himself Norwegian while on the toilet.

Thrillist, “A Cory Booker Reaction Is the First Great Meme of the 2020 Election”
Mashable, “Marianne Williamson’s oddball debate answers have made her into a meme”

I’d like to watch a debate on the realest question facing the Democratic field right now: Who was more meme-able this week, Cory Booker or Marianne Williamson? Booker, who also put forth a strong performance on the 26th, had an undeniably iconic reaction when Beto O’Rourke started spitting Spanish in response to a question about tax rates. (“He stole my bit, and he managed to avoid answering the question in TWO languages!”) But Marianne Williamson—author, spiritual advisor to Oprah, anti-vaxxer, and certified weirdo—stole the show on the 27th when she showed up evidently high as balls, didn’t speak for the first 30 minutes, and then used her closing statement to shit all over New Zealand. Sure, if Williamson hadn’t been there, other candidates who actually have a shred of political know-how could have gotten more airtime, but she was worth it just for the comic relief.

If you haven’t already done so, take the time to watch at least a few of the Times’ interviews, which neatly distill the essence of the Democratic candidates into revealing snapshots of their policies and personalities. Questions range from the serious (death penalty) to the lighthearted (comfort food), and the Times’ video editing is impeccable, drawing out moments of humor, poignancy, and contrast through well-planned cuts and splices. Stand-out questions include #4, in which Buttigieg has the only acceptable answer; and #5, in which Tim Ryan breaks a sentimental streak of candidates lauding their parents and loved ones by announcing that his personal hero is Cleveland Browns quarterback Baker Mayfield.

The New York Times, “David’s Ankles: How Imperfections Could Bring Down the World’s Most Perfect Statue”

Okay, okay: Not everything is about politics. If you’re looking to take a break from contemplating the countless ills plaguing the American people, don’t miss this narrative piece as informative as it is existential. Sam Anderson masterfully weaves together committed reporting with raw, personal honesty on his own relationship with art and life, infusing the story of Michelangelo’s David with a sense of universality and enveloping the reader in his lustrous prose—regardless of whether or not you took Art 105-106 at Vassar College. As you may be able to guess from the 2016 publication date, I procrastinated reading this article for literally years (did I mention my short attention span?), but I promise it will be worth your time.

This piece has it all: mystery, intrigue, honey bees, a clandestine weed-growing operation, vintage cars, maraschino cherries, and the artful storytelling that has long defined The New Yorker as the gold standard in creative reporting. What more do you need? It’s the quintessential summer article, so go forth and enjoy.