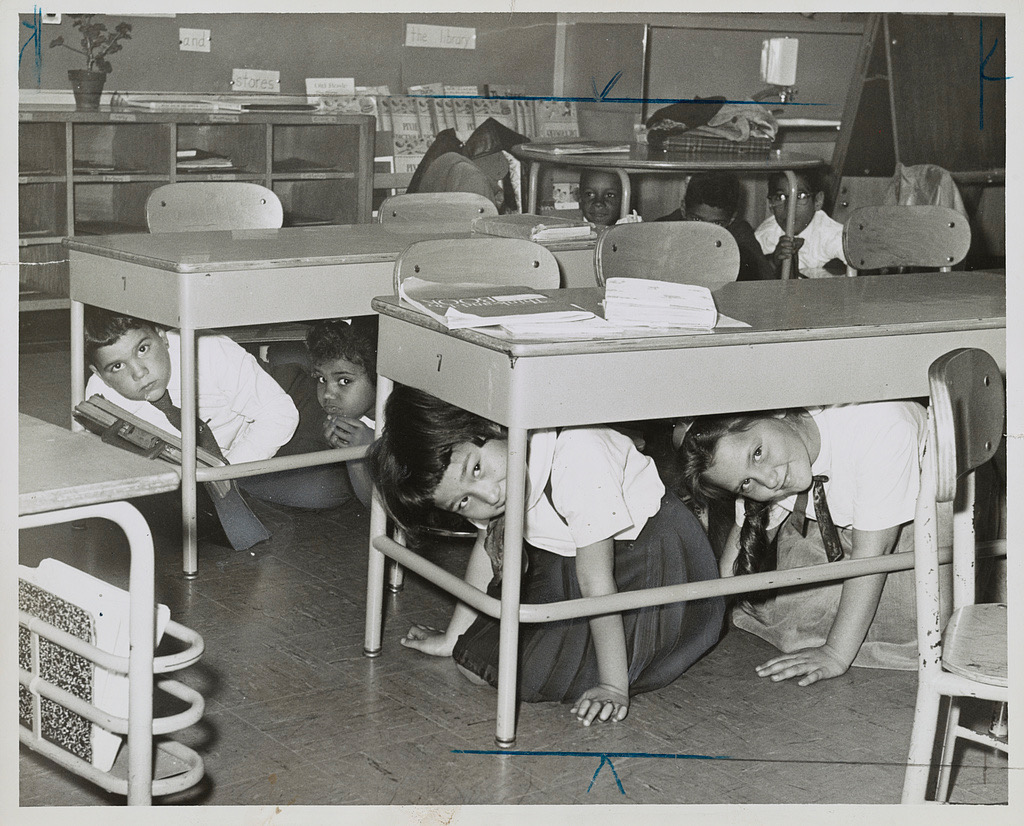 Thousands of feet hit pavement as throngs of people tear through the street. From above, the rapidly moving bodies look like a swarm. A sharp bang and the mass heaves forward, relinquishing their belongings to the road and sprinting away. They are running for their lives.

Imagine that you are among them. Imagine that it is Tuesday, August 6, and like any other day, Times Square is teeming with people. Imagine the crowds, the inability to move through hoards of New Yorkers and tourists orienting themselves with iPhone maps and taking selfies in front of bright billboards. Now imagine them all in motion. Imagine you hear a loud, cracking boom, and see all the bodies take off. Imagine the collective fear, the adrenaline, the buzzing in your ears as you take in mass shouting and the slamming of shoes on pavement. Imagine how you feel when your day suddenly stops, and you take off with them.

The sound that set off this flight turned out to be a motorcycle backfiring. Just days after devastating shootings at an El Paso Walmart and a Dayton bar, widespread panic befell Times Square, with surges of people mistaking the noise for a gunshot or a bombing.

These are the times that we live in. Sounds we would typically attribute to loud motorcycles or the tops of dumpsters slamming shut could be the open firings of a gunman, the prelude to blood spilling in the streets. One woman present for the torrent in Times Square thought her daughter would be shot in front of her; 22 people were in El Paso. Children grow up practicing active shooter drills in school, learning about Columbine and Sandy Hook like they learn about 9/11.

My former high school is around a half hour drive from Sandy Hook Elementary School. I remember where I was when word of that shooting broke. I remember when administrators informed us over the PA system, our principal somber and grappling to find gentle phrasings as he considered putting the entire district into a shutdown. I remember having early dismissals and a day off for two different incidences, one a bomb threat, the other a shooting threat. Neither were real, but the fear that they could have been still lingers. We took on even more drills and protocols, much in the way generations past took on nuclear fallout drills, hiding under desks and turning out lights. Except in this era, the violence doesn’t have a single origin, rooted in international political turmoil; this violence could come from anyone, at any time.

Many conservatives characterize taxes and unemployment rates as some of the issues that keep folks up at night; these are the so-called kitchen-table topics that should be at the top of everyone’s political agendas. “It’s the economy,” they say of Americans’ concerns of interest.

But it’s time to wake up. For my generation, gun violence and “progressive” issues like it are the types of “kitchen table” topics that keep us up at night. When I first moved into my dorm at Vassar, I remember laying wide awake at night with my new roommate. Making friends and finding my way around campus for the first time was far from my mind. Instead, I was formulating an action plan in the event that a shooter entered the building. Which of the three exits would I run to?

I often contemplate whether it will be safe to go out to a movie, or my favorite restaurant—I mull over cost, timing and whether I’ll be shot to death with equal scrutiny. Millennials and Generation Z-ers have steeped in the milieu of potential instant death occurring on almost any given day for almost our entire lives, contributing to our anxieties and other mental health issues, particularly among those directly affected. Like climate change or student debt, gun violence looms over us, an existential threat that tangibly touches us. It is as real to our lives as the economy, inseparable from our current realities and experiences.

To many people touched by gun violence, advocating for regulations on arms sales, better background checks and bans on semi-automatic weapons are not merely viewed as political leanings, but as bare-minimum necessities. Claims that such legislation would make only a nominal dent in preventing mass violence make little difference to us when pushing for a national bare-minimum—for something, anything, to change. To us, being told we shouldn’t push for such legislation because it doesn’t completely eradicate the possibility of future violence is like telling a starving man he shouldn’t bother eating a single grape since it won’t prevent him from impending death. But why not?

To others, the right to own a weapon is an indelible feature of the U.S. Constitution, a fundamental way of American life. Such individuals may question why a mentally stable and law-abiding American should be forced to relinquish their right to a weapon.

To me, the answer seems obvious. Some rights are simply more important than others.

If you’re someone who believes in the Second Amendment, you might also believe in the foundational principles of our federal model. If that is the case, then you might be familiar with Thomas Hobbes, a political philosopher whose ideas heavily influenced Western political thought. To scantily borrow from his Leviathan I, Hobbes proposes a social contract theory, wherein everyone agrees to limit some of their own natural rights in exchange for mutual self-preservation. For example, two people may give up the primitive freedom to steal from one another, thereby gaining a nominally more limited, but actually more secure, right to own their own property. To put it in my own terminology, the right to one’s own property is more valuable than the right to take someone else’s property. To maintain that more important right, man must relinquish a subsidiary right.

The same principle holds here. Let’s say you are given an ultimatum: give a robber your computer, or be killed. You would obviously comply with giving up your computer. Or perhaps the demand is that you offer your house: certainly a more burdensome demand, but still, it seems you would be willing to comply for the sake of your survival. You probably agree that a gun is a less valuable item than your home. But still, you might argue this mode of thinking is pointless, since these aren’t the conditions you face: Your chances of getting killed by gun violence are low, roughly a 1-in-315 lifetime chance, so you’re not anticipating that this legislation would impact your life directly. But if rates of gun-related deaths continue at the current rate, 36,000 people will die in the next year. With that in mind, doesn’t it seem you would give up your computer, or any item comparable to your gun, if faced with an ultimatum that 36,000 people will die if you do not?

If you would be willing to give up a piece of your private property to ensure personal and public safety, then it logically follows that you should be willing to relinquish your right to own a gun. In response, you might say your gun ownership isn’t merely a matter of personal property rights, but of your right to self defense. You simply would be incorrect making such a claim, however, unless you can be certain that the number of deaths private gun ownership has prevented outnumber those it caused. Afterall, if widespread gun ownership makes you less safe, you can hardly consider your own access to a gun a promotion of self defense. I don’t need to tell you that study after study demonstrates that guns make us less safe, even on a domestic level. Citing self defense as the driving force behind your gun ownership is just illogical, at best.

You might say that you aren’t the only one giving up your gun—after all, there’s 393,300,000 civilian-held firearms in the U.S.—and you can’t guarantee that doing so will save many lives. To that, I say: How many lives is your gun ownership worth? What is the ratio of guns-to-lives that we look to confirm before we give up our Second Amendment ‘rights’ on a mass scale? It seems obvious to me that these “inconsequential” changes brought by relinquishing gun ownership—the prevention of one suicide, say—are, in fact, far from inconsequential. Even if you believe that Americans have the right to own a gun, you must agree that man’s right to life—a fundamental human right, not merely a Constitutional right—simply has more weight. Americans must relinquish the right of gun ownership for the social contract of mutual protection.

I’m not saying that any proposed legislation will eradicate gun violence. I’m not even bothering to mention the details of any gun-control legislation. Instead, let’s focus on a more extreme, theoretical universe than the one that existing bills, if passed, would create. Let’s imagine one in which nobody in America, regardless of criminal status or mental health, can legally own a weapon. What I propose is something radical: A healthy, stable, and law-abiding citizen’s right to own a weapon should not even be a concern in any conversation about reducing gun-inflicted death.

So let’s wake up. Our rights to guns might not be harmful in theory, but their widespread availability has contributed to the collective anxiety that renders us paralyzed. Today in America, we are vulnerable as soon as we step outside of our homes and into the dangers of public space. For the safety of everyone living in this country, domestic terrorism cannot remain a partisan issue. It’s time to take on the NRA, white nationalism, and domestic terrorism. It’s time to be able to rest easy again.

Image from Library of Congress via Wikimedia Commons