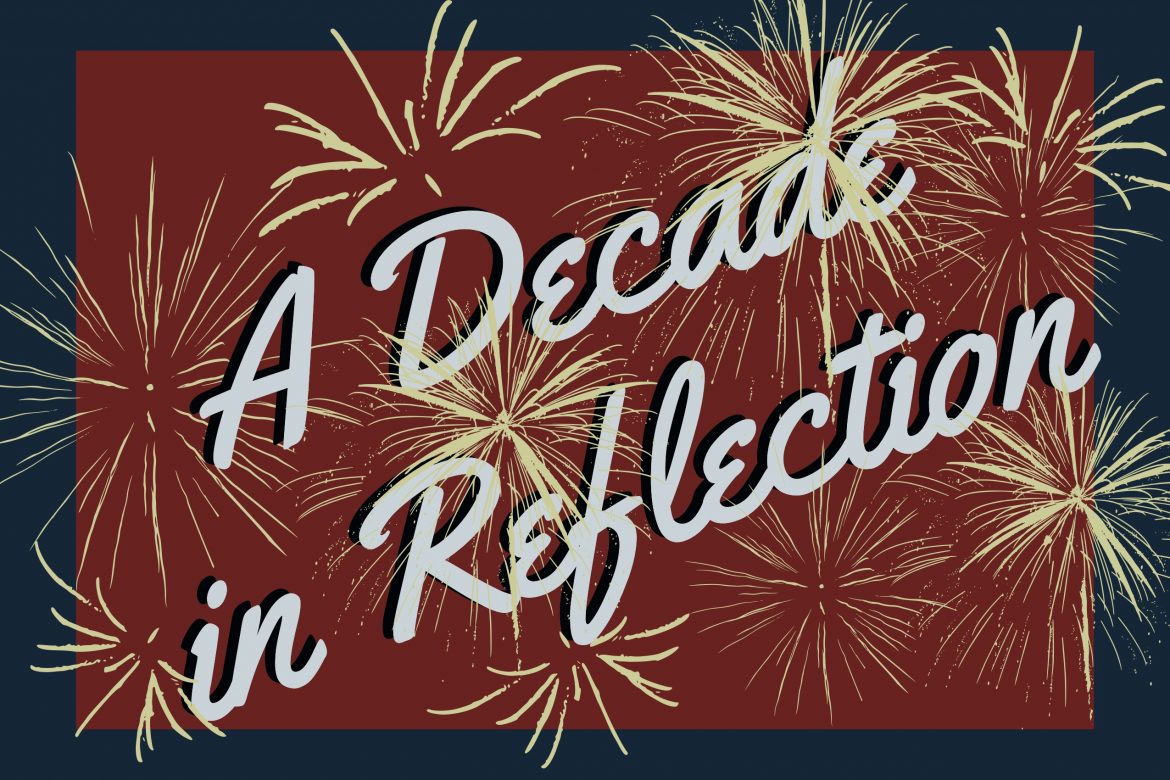 Year-end lists are usually oversaturated with culture-shifting moments that could easily be pinpointed on a timeline from a history book. Yet random, irreverent glimpses can often stick more poignantly in our memories. Brewer’s Table writers gather to share stories of these memories, firmly rooted in the 2010s.

When my dad describes our first year in Tokyo, he talks about how my sister and I studied Japanese at our bilingual middle school and how the three of us played traditional Taiko drums on a weekly basis. My laptop tells a different story: 520.5. It represents the hours I spent on two computer games. The virtual buttprint of a lonely gamer.

I wasn’t in Kansas anymore. Or in my case, Omaha, Nebraska. Gone were the sports teams, the band practices, the gymnastics classes, the convenience of matching time zones and Call of Duty that kept me and my friends routinely connected. Going from a highly structured schedule to raw freedom was like going from a prescribed, healthy diet to having a whole supermarket to yourself. A typical 12-year-old will choose to eat mind-numbing quantities of online candy.

Another international move, three schools, eight years and an ungodly amount of screen time later, the world around me has changed so much. Yet I have changed so little. The contradiction between my on-paper story—what my parents see, what I list on my transcript and resume—and the clock’s story persists. How I budget my time has hardly budgeted. My seat imprint remains a stagnant box I waste away in. I have sunk too deep in a definition of myself that I didn’t have the courage to redefine. Not until now. Not until 2019, less the end of my decade and more the start of a new one.

I’ve started getting off my ass.

The sliding door of his dad’s minivan creaks, then slams. We walk up the driveway; he won’t hold my hand. He stops, turns toward me. The air feels heavy, like I’m about to enter a freeze frame of a Disney movie with the voiceover “I bet you’re wondering how I got here.” My brain supplies the mock play-by-play in red Expo marker.

“So that’s it, then?” I sound far away to my own ears; my cheeseball memory replaying the New Year’s Eve kiss of just 18 hours earlier, annotated.

“Yeah.” He tosses up, then forehands the shuttlecock into my half of the court. I let it hit the hardcourt in-bounds.

He tries again. “I just…I feel warm when you touch me, but that’s it. I can’t be what you want.” Game, set, mismatch.

I go inside and cry on the couch for about three hours, then watch Pride and Prejudice—not the movie, but the BBC miniseries.

I can only assume he gets in the minivan and falls asleep to the dulcet tones of his dad’s favorite podcast, This Week in Virology.

Middle school summers are mosquito bites that welt on my knees, Sun-In damaged hair, and my first padded bikini. I’m watchful, stealing glances at my friend as she dips a single toe into the frigid pool water and instantly howls. She is always laughing, a Siren voice singing in the sunny air. She tells me to go first. Our faces stare back at us from the pool, distorted scribbles along the surface.

We are playing the drowning game—an all-time favorite. She is the lifeguard, so I dive in alone. My legs bat the water while I struggle lower, lower, into a dark corner for her to find me.

The light glints under the surface, dapples my shoulders, which blossom with nascent burns. Underwater feels like being between two worlds, a birthplace or a deathbed, my skin the only barrier between blood and water. I squint at the drain beneath me—her grandma told us not to go down there, because our hair would get sucked in, and she wouldn’t hear us screaming. I’d learnt that, although we can’t hear them, whales call to one another in the ocean, but sometimes other sounds trick them, pull them apart.

There’s a swell of uncertainty and longing for the surface, and my face contorts into a frozen wince. My ribs convulse but I hold my nose and mouth shut, disciplined. Any second now, I think.

The water ripples and I know she’s finally come. I hold on, my veins and lungs aflame. A nail scratches my wrist while she fanagles a grip, and we ascend. I kick desperately.

We finally break the surface. As soon as the dry air hits my face, I gasp. My lungs fill with water—I was hasty, a second too soon. I sputter, making my way to the rocks beside the pool. My vision darkens while she paddles over, lifts herself out.

Seconds pass. I am heaving, deafened. I crane my neck back, pleadingly squinting at her lurid eyes as she towers above me. Her hair drips, and the sun stares down at me from behind her. I wonder, lingering in the chasm between life and death, if she hears me.

She wraps her arms around my ribs and pulls. The water spills from my lungs. She dives back in, those high pitched shrieks calling me once again. Wary, I elect to burn on the rocks.

The decade began with me wedded to music made for the underdogs and the downtrodden, but fraught with queerphobic and misogynistic content. General maturation with age pushed me away from many of the Eminems and 50 Cents of hip hop and into the progressive musical arms of artists like Macklemore; but overall, my music taste is still debased and confused. After all, rapidly departing from the same subgenre I’ve been engrossed in for most of my life in a matter of a year or two has left me with little time to fill that entertainment vacuum. And that’s not necessarily a problem.

In 2010, Eminem’s “Recovery” seized my 11-year-old psyche’s full creative attention and pulled me headfirst into the world of lyrical rap. Though I’d spend years searching for the speediest artists, such as Busta Rhymes or Tech N9ne, or the wittiest wordsmiths like Nas or Jay-Z, I always came back to Eminem. I still maintain that his work comprises the perfect intersection of lyricism and interesting content, but feel as though my relatability to Em stems from my middle-class whiteness, and that I missed out on other artists to whom I subconsciously wished to remain dissimilar.

Embracing language that supports violence against gender and sexual minorities in the name of good rhythm is all too tempting. Growing up in a series of Catholic schools with mostly upper- or middle-class white students, the misogyny- and homophobia-ridden atmospheres I was constantly in made this easy. Accordingly, I had no problem buying the 2013 Marshall Mathers LP2, 2014 Shady XV, and 2015 film Southpaw’s soundtrack. In day-to-day life, I didn’t use violent vocabulary and adhered to egalitarian ideology. My continued embrace of music that contradicted my philosophical and political tenets reflected not just a lack of commitment, but my willingness to espouse progressive ideals while still being seated on a porch of privilege with no need to depart.

Entreating with homophobic content became impossible when I began to realize and embrace my own queerness, and finally departed from my small, fucked up bubble into the real world. Save for the occasional intrusion into a Spotify workout playlist, I don’t listen to the vast majority of songs that I’d blare on oversized headphones during the first half of this decade. On a practical level, my eardrums ring less. On an existential level, there are fewer incompatibilities with the things I believe and the art I consume, and that puts me at some ease.