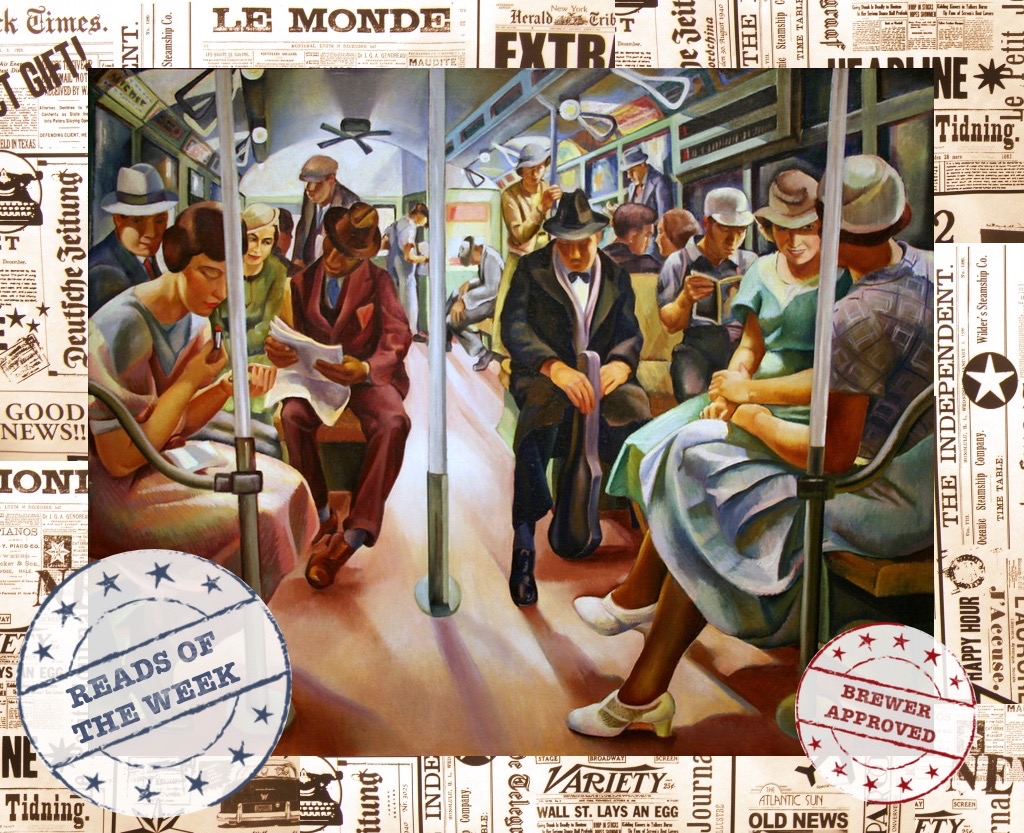 Close your eyes and picture the quintessential summer moment.

Maybe you imagined backpacking through a tropical rainforest, sweat streaming down your back and the trills of exotic birds in your ears; maybe you envisioned humid evenings in your family’s backyard, touch football games in full swing and air filling with the smell of barbecue; maybe your mind brought you to the sky-high office that houses your dream internship, or the halls of a local university where you are expanding your mind on your own schedule. Summer is many things to many people, and for those of us still in school, it’s often a strange and confusing liminal space separating us from the measured routine of college and the people we love back at Vassar. We at The Brewer’s Table have scattered far and wide this summer, but we can all agree on one quintessential summer moment: curling up with a great read. This week, Table Writer Jessica Moss shares her must-read articles for the last week of June. We hope you’ll give them a try and share in this moment with us.

Musings by the author

As the Democratic primaries creep closer day by day, the potential for interference and the proliferation of misinformation to occur (yet again) in 2020 have pressed to the forefront of our news sources. Reactions to the leave of Press Secretary Sarah Sanders, feuds amongst politicians, European Union elections, and a fiery back-and-forth between Trump and Biden make headlines across the country. We read about China as our politicians waffle between considering it a capitalistic ally or a hegemonic enemy, all while quietly attempting to hinder its leaders from fostering a connection with Moscow. We witness less and less coverage on the migrant crisis that persists even as European and American willingness to provide aid subsides diminishes, and instead turn our attention toward Tehran. Meanwhile, what I dub as urgent abortion rights and climate change crises linger in the underbelly of this mayhem.

In the spirit of the slowly burning news frenzy, the past few weeks have seen turmoil in areas ranging from a perceived international threat to natural energy access to disease outbreaks and heatwaves, to the usual controversy surrounding Russian collusion in the 2016 election.

But what information is truly important in such a chaotic milieu? Where can we turn for honest, reliable journalism? We at The Brewer’s Table and The Miscellany News intend to use our (admittedly humble) platform to direct our readership to what we perceive to be the most noteworthy and reputable sources, by way of this new summer series.

So, what should you read to stay up to date? Here are my top five article recommendations:

Controversy in the gulf, Iran

After two oil tankers were attacked in the Gulf of Oman on June 13 and an Iranian missile took down a U.S. drone, Washington scrambled to respond while reporters and the public alike focus on Tehran. The conflict has unfolded further since this New York Times article’s print publication last week, including Trump’s call off of a retaliatory strike just 10 minutes prior to its intended launch. This timeline of events draws the public eye toward the United States’ titular “maximum pressure” diplomacy toward Iran, and the role Washington has played in developing the conflict since 2018.

In case you haven’t heard, Sudan is undergoing a major power transition, and forces from the ousted regime are committing a range of human rights abuses against protestors to resist the change.

This article summarizes the origin of Sudanese citizens’ peaceful protests and the violent, militant response of the Sudanese security forces, led by Janjaweed militias built under the previous regime, which remain in power as Sudan undergoes a three-year transition period. Further, the piece explains how U.S. leaders, under the Global Magnitsky Act, can combat these violations by sanctioning those responsible and freezing assets, with the goal of moving the political needle.

Responses to this particular piece veered in an interesting direction. Author George Clooney flexes some decent writing chops, using his celebrity platform to garner public attention. In turn, the article’s mantle has been picked up by young people across the country, primarily in moments of ostensible support such as changing Facebook and Instagram profile pictures to “spread awareness.” In addition to inspiring these acts, the piece pushes readers to move beyond simple awareness and toward actual solutions for Sudan.

A spicy squabble between Trump and Biden

To be honest, I’m not a fan of The New York Post. As both a cat- and comedy lover, I subscribe to the view of the Post frequently espoused by my father: “I would put the Post in my cat box, but that would be redundant.”

However, when it comes to entertainment, bordering on scandalous content, The New York Post can certainly deliver, both in subject and presentation. Last week, I somehow ended up with the Post glued to my hands when I came across this article on Trump and Biden’s campaign trails in Iowa. It is largely a collection of Trump’s and Biden’s quips at one another, ranging from intellectually stimulating comments such as “Joe Biden is a dummy,” to jibes on old age, to genuine concerns about Trump’s understanding of rudimentary economics. My father and I noted that the discord reminded us of “a teenager yelling at a priest.” It’s hard to explain.

If you’re looking for some entertaining quibbling by two elderly politicians, I highly recommend you give this one a read.

Hong Kong protests over extradition bill, and a meager response

Hong Kong’s streets are rife with protestors opposing a bill that would allow suspects to be sent to mainland China for trial. Many attending the mass demonstrations are young people who believe the bill challenges Hong Kong’s autonomy.

Opening with footage from the early stages of protest beginning on June 9, this visual piece illuminates the sequence and escalation of events leading to the immutable swarms of people on Hong Kong’s streets today. With shocking visuals and easy-to-read overview, CNN’s video news offers us an immersive view, presenting the depth and extent of demonstrators’ opposition to the bill.

Antibiotic use in agriculture, and the dangers it poses

This is a topic of critical importance. Last week saw another Ebola outbreak in the Democratic Republic of the Congo, sparking debates surrounding what to do with a medical system that disproportionately serves the elite few, at the expense of those who need its coverage most. The importance of resisting the spread of disease for human health must come into focus.

This New York Times article centers on the role of agricultural industries, specifically the swine industry, in creating drug-resistant germs through excessive antibiotic use. Perhaps a deadly virus itself, the antibiotic manufacturer World Pork Expo and other similar drugmakers push messages such as “Don’t wait for Pig Zero” to persuade farmers to provide antibiotics to all of their pigs as to avoid disease outbreak. The World Health Organization has for years begged farmers to stop using antibiotics on healthy animals, aware that such abuses will render life-saving drugs ineffective against immune bacteria, which can spread to humans.

This is an issue that has existed for decades, and one that I believe will be at the forefront of this generation’s challenges. Drug-resistant disease, along with being a significant source of personal anxiety, can pose a challenge to the survival of humanity. Farmers and doctors alike must stop overprescribing, or we will all suffer. But that’s none of my business.