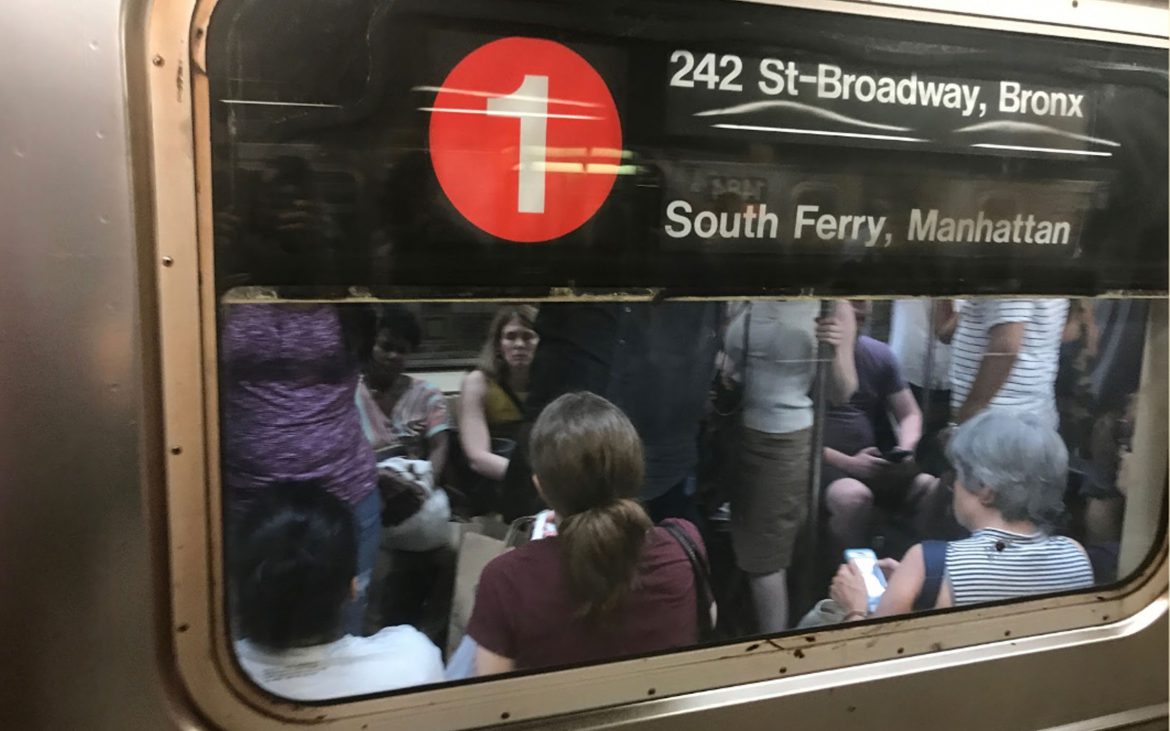 An old man entered my train car. He maneuvered a gray Walgreens shopping cart with a clear plastic bag, tossed squares of crumpled white paper towel like frisbees, and sat. As he did, his voice came spilling out, effortlessly projecting throughout the car. When you sit in an NYC metro train and hear a loud voice calling out, there’s a certain progression you learn to expect. First comes a greeting and an apology for bothering everyone, then a story, and finally a request for anyone who can spare some money. To my surprise, the old man began to talk about the weather.

Opening an ear to beggars or talkative strangers has often ended in any spare change departing from the inner crevices of my wallet. The distinction between the two is more of style than substance; the talkative stranger is often a more roundabout beggar. I listened to a jittery man in Boston’s Chinatown, who had visited his sick mother in the hospital, was trying to take the train home, and needed money. I conversed with a friendly man on a Harlem train platform, who had just served six months on Rikers Island, was only given a Metro card to return to his wife and child further upstate, and needed money.

Both times, I stood there. I uhhhh’d. They persisted. “There must be truth to their story?” my sympathy implored me. “So what if there isn’t any at all?” After the encounters, another part of me sighed, opened a newspaper, and, looking over thick-rimmed glasses, lectured on the unlikelihood of their stories. “They were acting,” it barked, “and you rolled over.”

When I saw the old man, these questions resurfaced in my mind, emotion and rationality engaged in another tug-of-war. As I struggled to predict the nature of my interaction with the old man, I tried to appear uninterested. But I couldn’t resist observing the old man in detail. Everything article of clothing on him—save for his well-worn basketball shoes—was white. He had a faded white Yankees jersey, a matching cap, and, on his face, arms and shoes, coatings of white chalk.

Old chalk man started off by describing how he had just escaped the recent downpour of rain, which fortunately only took one victim: his bag smelled. He began to share a number of facts about himself. He was going uptown to see his girlfriend. It was his 70th birthday last month. He was a dancer, he said, to explain the chalk. He was homeless. As paradoxical as it may seem on a train full of strangers, he introduced himself as if he were a close friend.

When the train stopped, a red-headed woman came onto the train, pushing a double stroller with a red-headed boy and girl. Old chalk man called out to her and offered his seat. The red-headed woman listened, and politely refused; she would be getting off in a few stops. Old chalk man then served a slew of niceties, about the beautiful children with beautiful red locks they must have gotten from their grandparents, and about the son’s future of wild popularity with the ladies.

During the exchange, the boy peeked at the chalk man with bright, playful eyes. The boy’s hands shyly extended outwards. Invisible Spiderman webs instantly fired from his fingertips, aimed right at Old chalk man. Old chalk man happily played along, contorting his body and hollering to the mother, “Your son is shooting me!” This went on for a beat too long—the way a child’s play often does. Laughing, Old chalk man gave me a familiar shake on the shoulder, eager to share his mirth. My lingering doubts about simply showing interest restrained my reaction.

Old chalk man declared that he would dedicate a dance to the red-headed family. No mu~sic, no mu~sic, he sang as he stood up, positioning himself between the subway poles. He shuffled and shimmied and spun, his energy and effort belied by the jerkiness of his 70-year-old body.

Then he stopped. Old chalk man had spent the day dancing anyhow, he said, and he was all worn out now. As the family was leaving, he thanked them for making his day, and reminded the mother how popular her son was going to be. He retreated to his paper towel squares, exiting center stage. I was still wary of finding myself in a theater, watching a performance I hadn’t yet paid the ticket for.

Some time passed, and more words, some vulgar but not mean-spirited, left Old chalk man’s mouth. A couple of youths asked him about his chalk. He replied that he was a dancer, and danced yet again. No mu-sic, no mu-sic. They left, too, and for the third time he sat back down. He was alone again in a space full of people.

Without warning, Old chalk man threw his paper towels to the seats opposite him and moved to sit, resulting in a few not-so-nice looks from people in the vicinity. Undeterred, he talked some more, and some more. He was eventually interrupted by a man to his right who had been reading a blue Spanish-language Bible. The Bible man pulled out from his duffel bag a Swiss cheese and tomato sandwich, and offered it to the Old chalk man, who looked surprised. He had never asked for charity. After accepting the sandwich, Old chalk man asked the Bible man his name.

The Bible man replied, “Victor,” with a rolled “r” on the end. Victor managed to spell out, “V-I-C—” before Old chalk man interjected, “I went to school! V-I-C-T-O-R, Victor. I’m David. Nice to meet you.” David pronounced his name with a Spanish inflection, making the ‘a’ short and the ‘i’ long. Gesturing with the sandwich, David added, “Muchas gracias.” Victor laughed. “De nada.”

Then David offered Victor a soda.

“God bless you,” David replied. “And everyone, of all colors, all people,” he said, turning to the rest of us. He turned back to Victor. Victor’s Bible was cool because it was blue, unlike any David had ever seen. David quoted Psalm 23, about the Valley of the Shadow of Death, and referenced Matthew 1:1. He extolled the Holy Spirit for putting him on the same train as Victor. The Holy Spirit’s presence was needed to combat the Devil, who David referred to as “el Diablo.” David then told stories, parables, really, of a gunman in South Carolina who shot the church members of the Bible study he had joined, and a Texan son who shot his dad over $100. This was how el Diablo worked, David explained. His professed piety was not lost on Victor.

David revealed that El Diablo allegedly tried to hire him, but el Diablo was actually scared of him. He punctuated the remark with an expletive. It was his first one in quite some time, and probably his first since he had started talking to Victor. My creeping doubt flared up. Was this a crack in David’s facade?

My stop finally came, and I exited the train. I didn’t know what to make of David, the homeless, just-turned-70-last-month, girlfriend-meeting, family-loving, God-exalting, Spanish-speaking, sandwich-receiving, soda-offering black-and-white dancer. He was not, as I had assumed, a story salesman, interacting briefly with every bystander for a little change. There was something bona fide in the way David put his best foot forward. Maybe he grasped for agency—agency over finances or the passing of time, perhaps. Or maybe it was for agency over feelings of loneliness, or for the blaring instant judgements of others.

I took out my smartphone, and opened Instagram, encountering an environment similar to the one I had just left. I, one of many pairs of public eyes, stared, watching a private life publicly aired, only in a digitized domain where that’s the norm, and where the best humor and best bodies must all be put forward. It’s funny how, every once in a while, someone on Instagram also makes a simple comment about the weather. Those times, we actually seem to care.