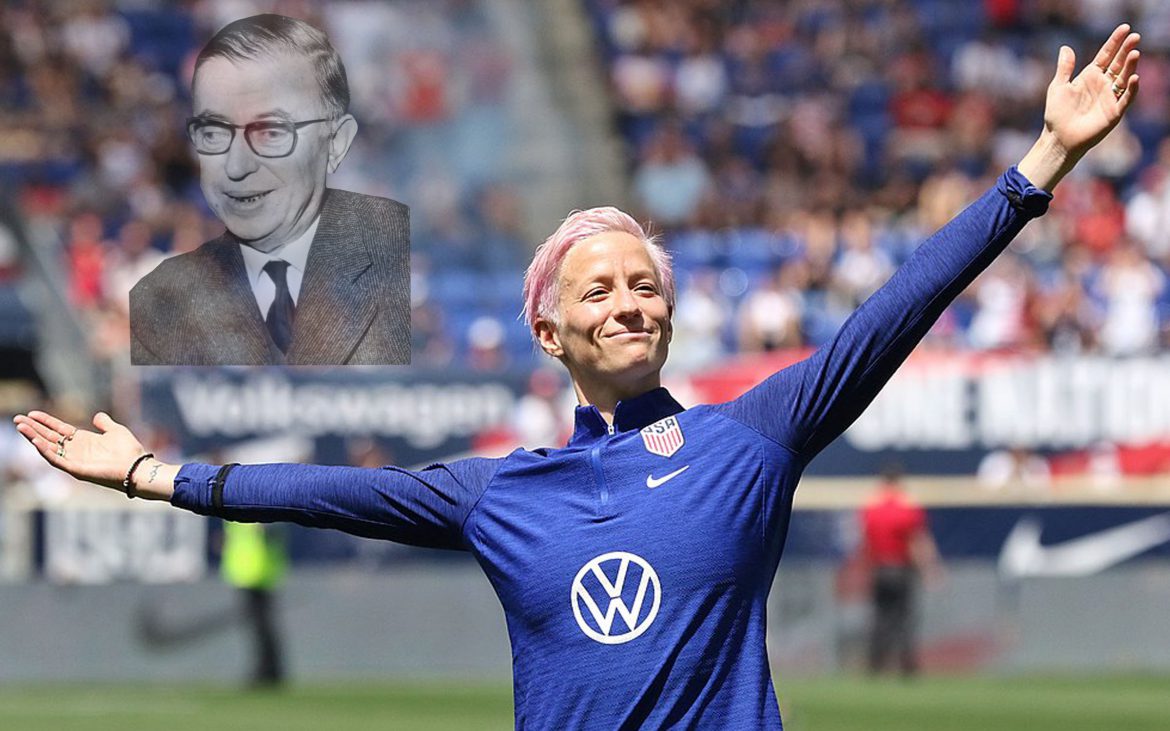 At some point (presumably) in the ’30s, a Frenchman, who would go on to be a prisoner of war and eventually the best-known philosopher of the 20th century, sat down to write his first philosophical text. At another point, some 80 years later, a then-closeted lesbian woman was drafted into Women’s Professional Soccer (WPS). She would go on to be a two-time FIFA Women’s World Cup champion, as well as a champion of LGBTQ+ and women’s rights—both in and out of the sporting world. In an unexpected congruence of fate, both the philosopher and the soccer sensation find common cause. Analysis of Megan Rapinoe’s recent activism through the lens of Jean-Paul Sartre’s humanist existential thought reveals that the cause for equal pay in women’s sports, as well as for feminism at large, is a humanistic endeavor—not a selfish movement, as detractors may try to insinuate.

Born in 1985, U.S. winger Megan Rapinoe was soon to compete at the highest levels that domestic soccer had to offer, playing for an Olympic Development Program in her youth soccer days. She was drafted to her first professional team, the Chicago Red Stars, in the 2009 WPS Draft. Several team changes and one league collapse and reformation later, Rapinoe now plays for the Seattle Reign FC in the National Women’s Soccer League. More impressively, she is the winner of this year’s Golden Boot and Golden Ball award, given to the FIFA Women’s World Cup’s top scorer and MVP, respectively.

Born in 1905, French philosopher Jean-Paul Sartre devoted much of his intellectual life to expounding his version of existentialism: in a phrase, the idea that “man is nothing other than what he makes of himself” (Existentialism Is a Humanism, 2007, p. 22). This declaration and other views landed Sartre in hot water in a France polarized by the struggle between communistic atheism and Christian optimism.

Rapinoe, self-described as a “walking protest,” has entered the spotlight for more than just her athletic prowess. She kneeled during the national anthem in support of NFL quarterback Colin Kaepernick, and she called out President Donald Trump as sexist, misogynistic, racist, “small-minded,” and “not a good person.”  Rapinoe is also part of the lawsuit filed by the U.S. Women’s National Team against the U.S. Soccer Federation on the grounds of the former being paid less than their male counterparts, despite consistently outperforming them on the international stage. (The lawsuit also alleges that the federation “provides unequal playing, training, and travel conditions, and unequal promotion for games.”)

As it turns out, the charges made against Sartrean existentialism heavily resemble those that have been leveled against the USWNT, whether those be refutations against the movement for equal pay or attacks on the personal conduct of players like Rapinoe. Whereas existentialism is charged with being subject-oriented and grim, Rapinoe draws ire for turning attention towards inequality, striking bold celebratory poses during matches and remaining silent during the national anthem before them. Her foes are conservative pundits and, of course, Trump himself. On the other hand, Sartre’s foes, whom he addresses as Christians and communists, found themselves pitted against existentialism on the same grounds that anti-feminists (i.e. misogynists) find themselves at odds with Rapinoe. In a general sense, the antagonists of both movements fail to see the good will in the work of either the pink-haired athlete or the lazy-eyed philosopher. Like existentialism, women’s soccer—and all that it stands for—is a humanism, a movement focused on the well-being of people.

According to Sartre, communists assailed existentialism “for encouraging people to remain in a state of quietism and despair” (Existentialism Is a Humanism, 2007, p. 17). That is, to some, the dreadful revelation that there is no guiding hand of fate, and that we are entirely responsible for our own destinies. To communists, existentialism was no more than a cheap excuse to mope and wallow in the tragic realization that hell is in people, that we are the cause of our own suffering. Christians took common cause with this fault, having “condemned [existentialists] for emphasizing what is despicable about humanity … while ignoring beauty and the brighter side of human nature” (Existentialism Is a Humanism, 2007, p. 17).

Any time a mere human wishes to be revolutionary, and in turn sets out to criticize the status quo, the status quo’s beneficiaries are bound to bite back. In the case of a queer woman standing up for components of her identity (her sexuality, primarily), it is all too commonplace to encounter homophobic and misogynistic defenses of the heteropatriarchy, which often take the form of empty pontifications that declare the status quo as already satisfactory for minority groups. Trump has employed such a rhetorical strategy on his 2020 campaign trail, repeatedly imploring that Americans “Keep America Great.” In a message directed towards Trump, Rapinoe discussed her political agenda on CNN after the World Cup victory. The soccer-star-turned-activist criticized Trump and the white nationalist zeitgeist he has largely proliferated. Rapinoe explained, “I think that you’re harking back to an era that was not great for everyone. It might have been great for a few people, and maybe America is great for a few people right now, but it’s not great for enough Americans in this world.” While Rapinoe fomented inclusionary change on CNN, conservative pundit Tucker Carlson ascribed America’s problems to ungratefulness. Shouting from the other side of the aisle, Carlson levied an attack against Democratic congresswoman Ilhan Omar (D-MN), insisting that Omar “has an awful lot to be grateful for, but she isn’t grateful … not at all. After everything America has done for Omar and her family, she hates this country more than ever.”

Rapinoe’s archenemy (a.k.a. Trump) had previously tweeted about Omar, as well as about Representatives Alexandria Ocasio-Cortez, Rashida Tlaib, and Ayanna Pressley, each of whom are progressives aligned with Megan Rapinoe ideologically. Trump tweeted: “Why don’t they go back and help fix the totally broken and crime-infested places from which they came.’”

Blatant and vile nativism, revelry in gross colonialism, and outright racism aside, Tucker and Trump represent the rejection of any and all questions to a power structure from which they reap benefits. By rejecting an era of relative equality, they find themselves bedfellows with conspiratorial sexists and opponents of progress, placing them in diametrical opposition to Rapinoe and the USWNT’s pursuit of equal pay. Likewise, U.S. Soccer Federation President Carlos Cordeiro—though admittedly more careful with his words—tried to make the same intimation about the state of women’s soccer in the United States, mounting the defense that “over the years, from our development programs to our youth national teams to our professional league, the NWSL, to our women’s national team, U.S. Soccer has invested more in women’s soccer than any country in the world.” Although this may be debatably true, the observation serves to undermine the objective of the USWNT’s lawsuit against Cordeiro’s very organization.

The direct connection between existentialism and Rapinoe arises from Sartre’s own response to the charges brought against existentialism. Whereas Sartre contends that communists and Christians respectively place the center of their doctrines in collectivity and God, existentialism requires that fate, destiny and responsibility all stem from pure subjectivity. What I mean by this is that in communism, progress and goals are both practically and philosophically measured in the acts and conditions of the proletariat as a group—not as individuals. Likewise, Christians consider God the origin of everything, from morals to decision-making to the eventual fate of humankind. According to Sartrean existentialism, all is up to the individual, and the individual literally makes themselves. This is what existentialists mean by the phrase “existence precedes essence”: We’re born of natural accord, and by our own means we deal with our experiences in a way such that we craft ourselves, construe our own meanings of life, and control our own destiny as much as we can.

Megan Rapinoe has fashioned her essence in a way that we should envy. Not only has she lived a lifestyle embodying the hard work and experience required to make oneself a professional athlete, but she has also made the jump to being more than an athlete in a world that does not want her to exist. To many, she’s already been an American hero for a long time, perhaps as far back as her first goal in an international match, which she celebrated by singing “Born in the USA” to the entire stadium. That was gutsy. Even more gutsy, however, was her choice to publicly come out in a country that, at the time, had only recently legalized same-sex marriage, and where today, according to the Human Rights Campaign, homophobic violence is still “a serious, widespread problem.” In her coming out as lesbian, Rapinoe said,“ ‘People want—they need—to see that there are people like me playing soccer for the good ol’ U.S. of A.’”

Coming out to international sports media is one courageous feat; being an active athlete on a U.S. team and simultaneously dismissing the president of the United States is another. Rapinoe has already been on Trump’s radar for some time, especially as one of the first white athletes to kneel in solidarity with Kaepernick, a decision that she explained in the Players’ Tribune. Moreover, Rapinoe is an advocate for intersectional feminsm, explaining that “gay rights, equal pay, and racial inequality are intertwined,” and that “America needs to confront its issues more honestly.”

Considering that Rapinoe has gone through the wringer required to become a female athlete, come out as queer on the international stage, and proceed to be a voice for the disenfranchised during a World Cup that she absolutely dominated, she has truly become the controller of her own fate. This is just one true destiny that Sartre believed all people ought to seek.

In the context of Nietzsche famously declaring that “God is dead,” and Sartre in turn explaining that we, at best, assume the role of God in our actions and thoughts, perhaps there is merit in saying that “God is a woman and she plays soccer for the United States of America.”