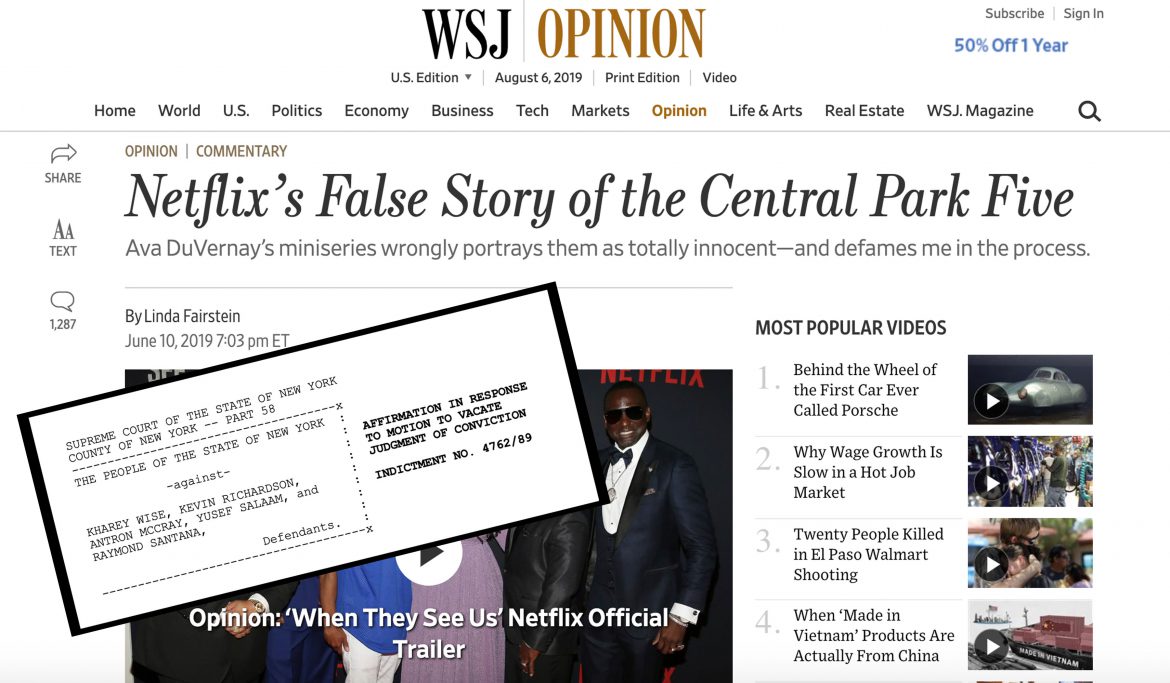 With the release of Netflix’s miniseries “When They See Us,” former prosecutor and Vassar Trustee Linda Fairstein came under fire for her role in the incarceration of five children who, after years of prison time, were cleared of all charges against them and had their convictions vacated. Upon this newfound publicity, Fairstein resigned her position as a Vassar trustee, and wrote an op-ed for the Wall Street Journal. In it, Fairstein decried the accuracy of the events depicted in “When They See Us,” presenting an alternative set of events that paint her in a more sympathetic light. Given that the case is almost entirely public record, it seems only fair to compare Fairstein’s recollection of events with the factual, legal documents.

From the get-go, there seems to be a discrepancy between what Fairstein reports and what is recorded in the legal documents I referenced. The second sentence of Fairstein’s article reads, “There were more than 30 rioters, and the woman known as the ‘Central Park jogger,’ Trisha Meili, was not their only victim.” While it is true that there were violent riots in Central Park on the same night, the assault and rape of Trisha Meili was credibly confessed 11 years after the original conviction by Matias Reyes, a lone individual who said that he committed the crime by himself. The riots were in fact not connected to the attack, and it is inappropriate to describe Meili as a victim of the riot in any sense.

Later, Fairstein points out what she considers to be largest inaccuracy in “When They See Us,” claiming it “repeatedly portrays the suspects as being held without food, deprived of their parents’ company and advice, and not even allowed to use the bathroom … [that] never happened.” As to the point of being held without food, Yusef Salaam, one of the youngest of the Five, had this to say: “When we were arrested, the police deprived us of food, drink or sleep for more than 24 hours.” Whether you choose to believe Salaam or Fairstein is up to you. However, there is no record of this assertion in either the motion to vacate or the motion to suppress Salaam’s confession. That being said, other elements of [the miniseries’ portrayal of] the boys’ mistreatment during the case are confirmed by the public record. Although the Appeals Court of New York held that the children were not unlawfully withheld the company of their parents, both the majority and dissent opinions make it clear that they were deprived of their parents’ company and advice. That happened. And it is a matter of public record.

Fairstein also blames the writers for putting words in her mouth, writing, “In reality, I didn’t arrive until 8 p.m., 22 hours after the police investigation began, did not run the investigation, and never made any of the comments the screenwriter attributes to me.” Fairstein was in fact approached by the makers of the show before production, but refused to work with them. According to producer Jane Rosenthal, “Her point of view was clearly that she didn’t want us talking to the five men if we were talking to her.” While I understand why the screenwriting would upset Fairstein, her criticism seems unwarranted, given she actively chose not to consult and give input on the events of that prosecution.

Fairstein’s next paragraph is incredibly accurate. While Netflix depicts the suspects’ arrest taking place in a park, Fairstein and public record report they were arrested in their homes. But not one paragraph later, in a paltry three sentences, Fairstein manages to misconstrue the events entirely. She writes, “The film claims that when Mr. Salaam’s mother arrived and told police her son was only 15—meaning they could not question him without a parent in the room—I tried to stop her, demanding to see a birth certificate. The truth is that Mr. Salaam himself claimed to be 16 and even had a forged bus pass to ‘prove’ it. When I heard his mother say he was 15, I immediately halted his questioning.” This is how Fairstein remembers events over 20 years later.

On the other hand, this is how the Honorable Judge Vito Titone described the events when parts of the case were still being litigated: “Fairstein and another Assistant District Attorney spoke with [the] defendant’s mother and told her that she would be permitted to see him after the questioning had been completed. After conferring with [David] Nocenti outside, [the] defendant’s mother went back inside, this time demanding that she be permitted to see her son immediately. It was then that she revealed for the first time that [the] defendant was 15, not 16 as the authorities had previously been led to believe. Apparently caught off guard, Fairstein bickered with [the] defendant’s mother and Detective Taglioni for a few minutes before deciding to call a halt to the interrogation. Even then, the questioning did not immediately stop.” It is true that Salaam had a forged bus pass; however, Fairstein’s assertion that she immediately halted questioning is not corroborated by a judge who oversaw part of the case. Furthermore, Fairstein conveniently leaves out the fact that she sent the mother away and that it took multiple attempts to force Fairstein to end the questioning of the child.

Toward the end of her article, Fairstein says “[“When They See Us” director] Ms. DuVernay would have you believe the only evidence against the suspects was their allegedly forced confessions. That is not true.” Quoting now from the New York District Attorney’s Office, “Ultimately, there proved to be no physical or forensic evidence recovered at the scene or from the person or effects of the victim which connected the defendants to the attack on the jogger, or could establish how many perpetrators participated.” Fairstein also says the confessions to the attack are corroborated by semen found on the inside of some of the Five’s clothing; In contrast, the New York District Attorney’s Office stated in 2002, “Using [the defendants’] videotaped statements as the point of comparison, analysis shows that the accounts given by the five defendants differed from one another on the specific details of virtually every major aspect of the crime … some of what they said was simply contrary to established fact.” In other words, every single confession had major discrepancies, not just from each other, but from actual events.

I would like to remind you, at this point, that then-prosecutor Linda Fairstein had access to all these facts. She did not have to indict these children on this evidence. She chose to do so, with no forensic or physical evidence, and with a dog’s breakfast of confessions, because she could, and because she wanted to. And she has never admitted wrong-doing, nor apologized. She had every opportunity to investigate the crime and bring the actual rapist to justice. She chose not to, and instead convicted five innocent children.

Finally, Fairstein ends her accounting of facts with “And there was certainly more than enough evidence to support those convictions of first-degree assault, robbery, riot and other charges.” Her position is not shared by the New York District Attorney’s Office nor by the New York judiciary, the former of which wrote, “[T]he trial evidence as to the other charges, like the evidence as to the attack on the female jogger, consisted almost entirely of the defendants’ statements … [T]he admissions concerning the other crimes were contained in the same written and recorded statements as the admissions concerning the rape, and were largely obtained as part of the same process of questioning.”

These are the facts. If you would like to ignore the evidence and continue believing that Linda Fairstein was misrepresented or even defamed, that is your right. I have no remaining tools to convince you otherwise. If you prefer to believe the events as accounted by Ms. DuVernay in “When They See Us,” that is also your right. The facts are in front of you—you can make your own choice. Though I have made my own leanings on this issue abundantly clear, I admit I am inclined to agree with Fairstein on at least one point: Ms. DuVernay does not define her. Fairstein’s own actions define her, and unfortunately, the lives of the 5 children she put in prison. This is her legacy.